This investigation was published by Capital & Main and the Guardian.

Safety claims made by the manufacturer of a restraint used by more than 1,500 authorities across the U.S. are largely based on anecdotal evidence and one disputed study, an investigation by Capital & Main has found.

The WRAP device, used by U.S. Immigration and Customs Enforcement (ICE), among many other law enforcement agencies, is a full-body system that the manufacturer claims can immobilize a person without restricting their breathing. The black and yellow harness with straps and buckles locks a person’s legs together and clips their torso into a seated position.

After 25 years on the market, more than 10,000 WRAPs are in use across the United States and Canada, according to the manufacturer, Safe Restraints. Institutions that use the restraint include police departments, juvenile facilities, hospitals, stadiums and parks, said Charles Hammond, the company’s president and CEO. The WRAP as advertised on the Safe Restraints website.

Safe Restraints markets the WRAP as “​​proven to save lives.” However, an investigation by Capital & Main has found that the company’s safety claims are mainly based on anecdotes and a study whose author disputes Safe Restraints’ interpretation of his work.

As the device has become more widely used, lawsuits over in-custody deaths and allegations of torture are emerging, a review of public records shows.

Safe Restraints advertisements say that the WRAP has been found to be “safe and 100% effective” by the Institute for the Prevention of In-Custody Deaths, a private company run by former law enforcement officers. Until recently, the Safe Restraints website hosted multiple testimonials citing the 2013 study, web archives show.

In one testimonial, Lt. Mark Hanssen of the Davenport, Iowa, Police Department said, “The well-respected Institute for the Prevention of In-Custody Deaths, Inc., finished an independent evaluation of the WRAP restraint and gave it their blessing as being both safe and effective. From a liability and confidence standpoint, we believed this was a very important endorsement.”

Safe Restraints continued promoting the claim when it started selling its product to the federal government in 2016.

John Peters Jr., president of the IPICD and the lead author of the study, said of the safety claim, “That’s probably some advertising license they’ve taken. But nothing’s 100% safe.” Peters said his report had significant limitations and identified potential medical and training issues associated with the device.

The IPICD decided to research the restraint system in 2013 because “the folks at the WRAP kept saying their device is safe. And we kept saying, ‘How do you know that?’ … The manufacturer couldn’t give us any scientific support,” Peters said.

Peters asked Safe Restraints to send a letter to its customers requesting reports of their experience with the WRAP. The company contacted only a select group, Peters said. And of those, only four police departments in California and Texas responded with about 100 anonymous incident reports.

No testing requirements, safety guidelines or certifications exist in the United States for full body restraint systems like the WRAP.

“Self-reporting is always a weak spot in any study, because you’re relying on the people to give you their impression,” Peters said. The study was descriptive, not medical, but it did identify some possible medical implications of the restraint that would need to be addressed in training, he added.

No testing requirements, safety guidelines or certifications exist in the United States for full body restraint systems like the WRAP, Capital & Main found.

Safe Restraints CEO Hammond said that because there are no standards, “We operate under the highest standards that we believe are necessary to help people stay alive.”

“Based on the number of users that we have, and units in the field, we have an incredibly high safety record,” Hammond told Capital & Main. He did not provide evidence for this claim.

Safe Restraints CEO Hammond said the WRAP is meant to save lives and reduce injuries. “We consider ourselves a human rights company,” he said. The device is “meant to stop a conflict quickly, which is good for everybody,” including the people applying it and those restrained within it.

Hundreds of police departments have bought the device over the years, according to Safe Restraints’ client lists. Many appear to have made these purchases in an attempt to avoid hogtie and hobble methods associated with suffocation deaths, news reports and testimonials show. Some departments have purchased the WRAP to replace other restraints following high-profile injuries or deaths in their custody.

Capital & Main identified 10 lawsuits brought by families of people who died in police custody during incidents involving the WRAP since 2000. Most of these lawsuits allege officers used excessive force and do not cite the restraint itself as the cause of death. Many of the people who died in these incidents had preexisting physical or mental health conditions, and some were intoxicated; most suffered cardiac arrest or stopped breathing while restrained in the WRAP.

But an ongoing lawsuit and an autopsy report suggest the provided training may not be sufficient to avoid deaths and the device itself could be problematic for people with certain conditions.

Safe Restraints is currently being sued by family members of Earl McNeil, who died in 2018 after being restrained by officers of the National City Police Department in Southern California.

Douglas Applegate, the attorney representing McNeil’s family, told Capital & Main that the key issue is how long the officers left him in the restraint system — more than two hours — without providing medical attention. National City settled with McNeil’s family for $300,000. Safe Restraints is seeking to have the case against it dismissed. A still from a police body camera video released by the San Diego District Attorney’s Office shows National City Police officers restraining Earl McNeil in the WRAP in June 2018 before he died in-custody.

Applegate said Safe Restraints should have put a warning label on the WRAP advising officers and other users not to leave someone in the restraint for too long. The company’s current application manual advises that the restraint is “appropriate for continued use as long as a danger exists for the subject, personnel or property” and the person is monitored.

Hammond told Capital & Main that based on publicly released videos of the incident, officers applied the WRAP appropriately but then left McNeil unattended in the back of the patrol car. “That’s not what we teach. What we teach is: Stop the conflict quickly, get them upright so they can breathe and then get prompt medical care as needed,” Hammond said.

Another ongoing lawsuit has been brought by the family of Dujuan Armstrong, a 23-year-old who died after Alameda County Sheriff’s deputies at the Santa Rita Jail struggled with him, put him into a WRAP restraint and placed two hoods over his head. 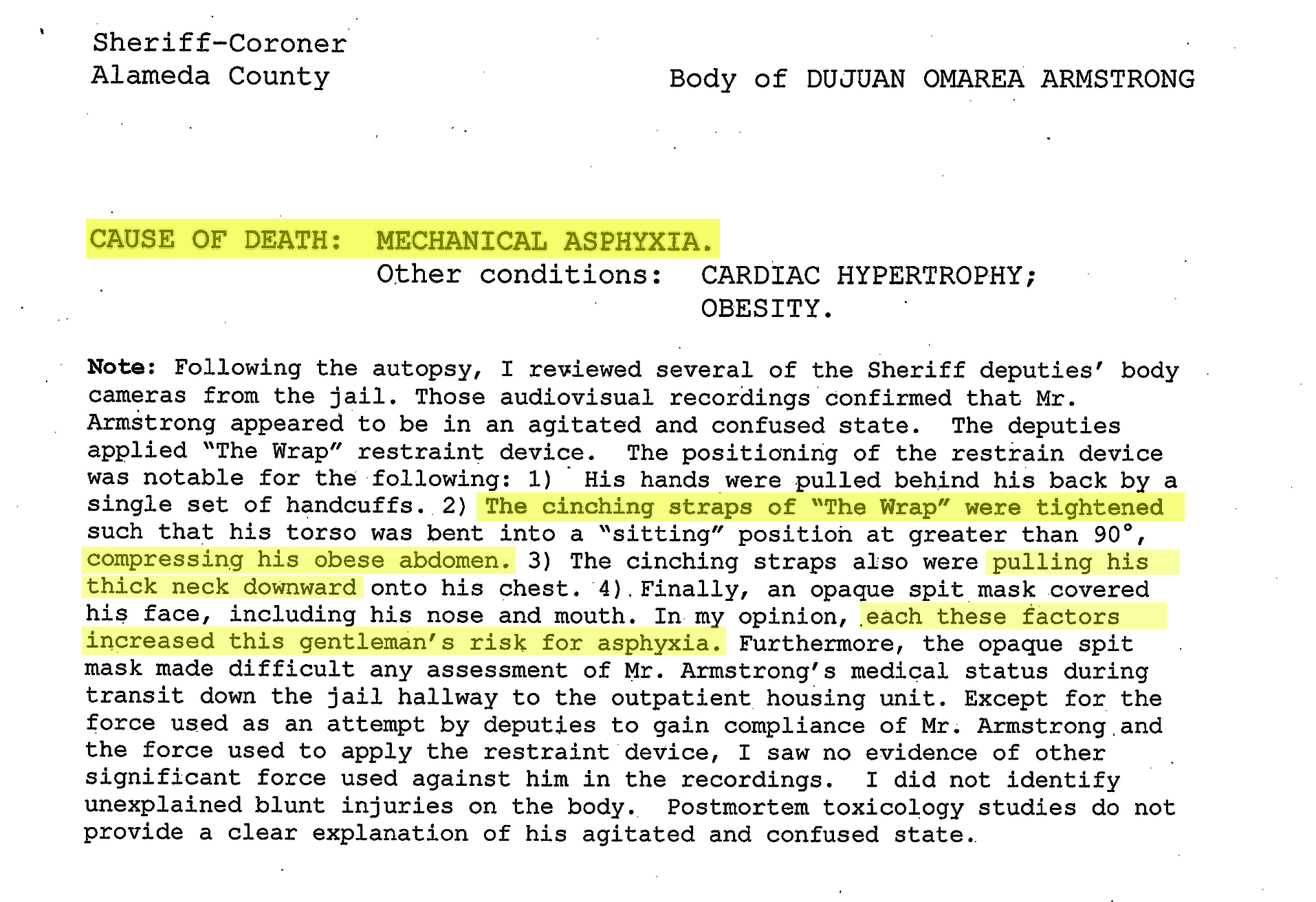 Ben Nisenbaum, an attorney representing Armstrong’s family, told Capital & Main that the main problem was that officers applied pressure while he was lying on his stomach. “I’m sure it’s the unusual occasion that people die [while in the WRAP]. But that doesn’t make it safe,” Nisenbaum said, explaining that the device may compress the diaphragm on someone with a bigger belly like Armstrong.

An autopsy by the Alameda County Sheriff’s coroner’s bureau determined Armstrong’s cause of death was “mechanical asphyxia.” The coroner wrote that officers tightened the cinching straps of the WRAP until Armstrong was bent into a position compressing his obese abdomen and pulling his neck down to his chest. Officers also put a spit mask over Armstrong’s face. “Each [of] these factors increased this gentleman’s risk for asphyxia,” the report said.

Hammond said of the Armstrong case, “We encourage the WRAP to be put on immediately to preserve energy and to avoid exhaustion,” but he declined to comment further.

The Alameda County Sheriff’s Office recently ceased its use of the WRAP.

As additional agencies and institutions adopt the WRAP, new concerns are arising.

Immigration and Customs Enforcement, the nation’s largest law enforcement agency, has become one of Safe Restraints’ top customers. Since the company started selling its device to the federal government in 2016, ICE has spent about $235,000 on WRAP restraints for its detention centers and private jets transporting immigrants among those facilities and for deportations abroad.

Several men deported to African countries in 2019 told Capital & Main that they witnessed ICE officers and contract guards using full body restraints to intimidate and force deportees onto flights, at times leaving them restrained for hours. At the time, the WRAP was the only soft restraint approved for use by ICE.

In October 2021, a group of organizations filed a complaint asking the Department of Homeland Security Office for Civil Rights and Civil Liberties, an oversight body for ICE, to investigate allegations by three men deported to Cameroon that the agency’s use of the WRAP constitutes torture and violates federal laws.

Sarah Towle, an advocate who has interviewed dozens of people who witnessed ICE’s use of the WRAP and supported the recent complaint, told Capital & Main that in at least one case, the agency kept a man in the WRAP for seven to 10 hours, and at times places hoods over the heads of those restrained. “It’s really traumatizing for people,” Towle said, adding that although the WRAP may be safer than hogtie methods, there is still potential for misuse.

The DHS Office for Civil Rights and Civil Liberties told Capital & Main that it has opened an investigation into the matter. But it would not answer questions about the ongoing investigation.

At least two juvenile detention systems in the United States have banned use of the WRAP. A federal judge ruled the device was an unconstitutional punishment akin to torture.

Torture allegations have come up before at youth detention facilities. Safe Restraints manufactures the WRAP in adult and juvenile sizes. Hammond said, “It’s not a comfortable topic. But if we weren’t there, what would be happening?” 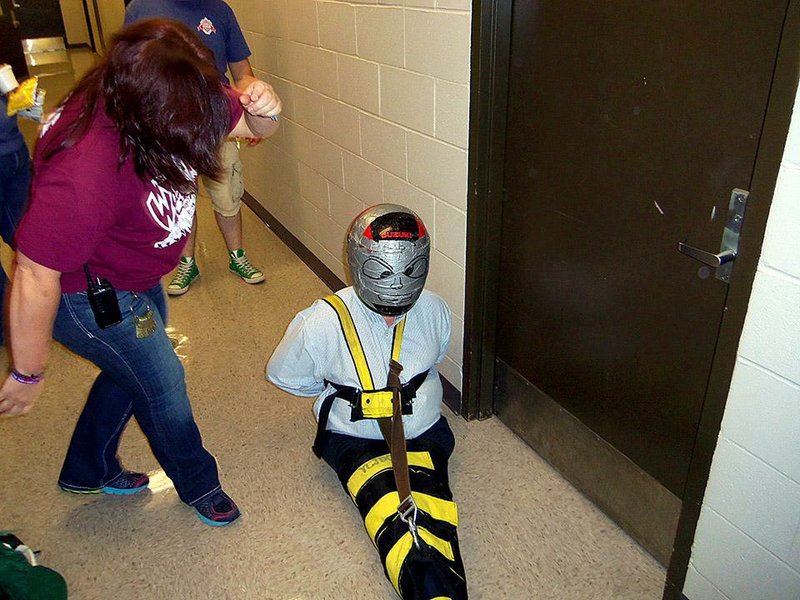 Arkansas’ juvenile ombudsman is restrained in a WRAP during a demonstration by staff at the Yell County Juvenile Detention. Photograph obtained by the Arkansas Democrat Gazette under the Arkansas Freedom of Information Act.

At least two juvenile detention systems in the United States have banned use of the WRAP. A federal judge ruled the device was an unconstitutional punishment akin to torture. And as recently as September 2021, a 17-year-old, Cedric “CJ” Lofton, died two days after being brought into a juvenile facility restrained in the WRAP and later held to the ground by several officers.

Despite these rising concerns, the WRAP is now being used across the country, including at venues like the San Francisco 49ers’ Levi’s Stadium, state parks like California’s Lake Perris State Recreation Area and Seacliff State Beach and medical facilities like the Community Hospital of Anderson and Madison County in Indiana.

“In a perfect world, nobody would be restrained,” Hammond said. “But when the time comes, when verbal de-escalation is over and a physical confrontation or encounter is unavoidable, what do we want to happen?”