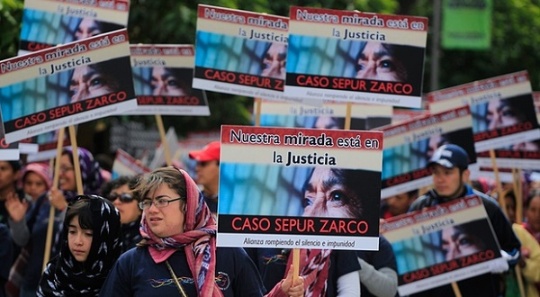 These are excerpts from a longer-form blog published on the Latin America Working Group‘s Just Americas blog.

In Honduras, just days before International Women’s Day, we were devastated to learn of the murder of Berta Cáceres, an internationally recognized Honduran environmental and indigenous rights activist. Berta won the 2015 Goldman Environmental Prize for her leadership in successfully halting a proposed dam on the Gualcarque River, considered sacred by the local Lenca peoples. Berta showed incredible leadership in the defense of human rights, even in the face of threats against herself and her family. In a 2013 interview, Berta lamented, “I want to live, there are many things I still want to do in this world. I take precautions, but in the end, in [Honduras] where there is total impunity I am vulnerable. When they want to kill me, they will do it.”

Sadly, Berta’s worst fears came true when she was murdered in her home on March 3, 2016.

In El Salvador, we stand in awe of the women who have taken action to protect women’s rights and fight for a life free from violence against women (VAW). Last year, LAWG had the honor of meeting Jeanette Urquilla and her team at the Organization of Salvadoran Women for Peace (ORMUSA) who diligently document every form of VAW from intrafamilial violence to economic exploitation. Alongside other strong feminist organizations, ORMUSA has pushed for legal advances that have moved the country closer to equality and protection from violence. On our trip to San Salvador last year we also met the fierce human rights defender Karla Avelar, a trans woman who has taken up the mantle of advancing protection through the law and defending LGBTI rights as the director of COMCAVIS TRANS.

In Guatemala, after decades of fighting for justice and more than four weeks of intense testimony, the Sepur Zarco sexual slavery case reached an historic verdict last month.

Eleven brave Mayan women detailed the war crimes committed against them during the country’s civil war and two military officers responsible were found guilty and sentenced to 30 years in prison for crimes against humanity, including sexual violence, sexual slavery, domestic slavery, and cruel and degrading treatment. Sepur Zarco is a huge victory for women’s rights and justice and marks the first time in the world that sexual slavery committed during civil conflict was successfully prosecuted in the country where the abuses took place.

Read the rest of this blog here.

0 comments on “Honoring Women Who Defend Rights in the Americas: International Women’s Day 2016”